It only happens once every 3 years – it is the KGK National Conference!

This year it was hosted by the Kansai region at a youth hostel in Kyoto. It is the furthest south and the furthest west I’ve ever been in Japan. So on Monday March 14th, leaving a snowy Sapporo, I had high expectations of warmer weather so far south…

We arrived in Osaka airport and it was drizzling and the temperature that day was the same as in Sapporo! Then we got on a bus to Kyoto, up into the mountains, until we started to see snow … I regretted not packing more warm clothing! Whilst Sapporo does tend to get colder weather, the houses are built for it with double or triple glazed windows, well insulated walls and effective heating. Houses down south, on the other hand, are built to cope with hot summers.

I think there were 16 in our room sleeping on futons on the tatami floor – cosy!

So it was a bit chilly, but there 200 enthusiastic students packed into the youth hostel which helped warm the place up. And there was also energetic singing and friendly fellowship in small groups with cups of tea (green or black).

One of the first things I received at the reception desk was a warm NC2016 hoodie, which I had forgotten I’d ordered – that came in handy!

The theme of the week was ‘Becoming a neighbour’ based on the story of the Good Samaritan (Luke 15). The challenge on the first night was that asking “Who is my neighbour?” leads to thinking “He is, she isn’t, and I’m not so sure about them.” But Jesus turns that question on its head: “Who was a neighbour to the man who fell? … Go and do likewise.”

We’re not to try to figure out who our neighbour is; we are to be the neighbour, and go do likewise. Care for those in need, in costly sacrificial ways, even for those who despise us.

The main Bible readings were led by a local pastor who was quite a character and had us laughing and weeping as he took us through the Lord’s prayer, looking at becoming a neighbour in relationship to God, others around us, and to society and the world. 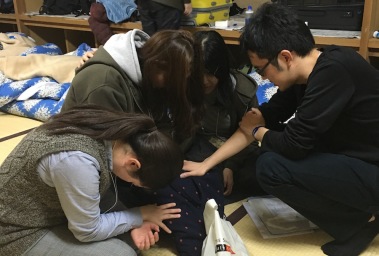 Japanese, Thai & Korean, all praying for each other in our small group – what a sign of the gospel breaking down the wall of hostility!

There were seminars on various topics such as the nuclear disaster in Fukushima, family problems, cults, and world mission. There were also presentations from each region of KGK in Japan, of which there are nine. Of course, Hokkaido is the best!

I had the privilege of being in an English speaking small group, which made group times a whole lot easier, but I was the only native English speaker in the group. The group included guests from the Thai and Korean IFES movements, as well as some Japanese students who speak good English and have a heart for internationals. We had a whole lot of fun together as we prayed for each other, laughed and cried together, and wrestled to dig deeper in our understanding of what we were being taught and how we needed to change as a result. The different snacks from different parts of the world added a bit of spice to the mix! 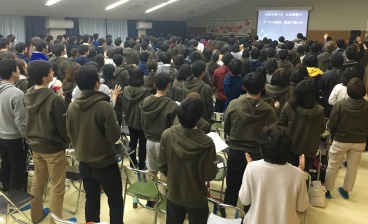 For many of the students, it was a rare opportunity to be with so many other christians. Most of them are in a Christian Union of one or two, a handful at most, in a university of thousands of non-believers, in a culture where there is so much pressure to conform.

In that environment, it is very hard to be different and to admit to being a christian, let alone proactively proclaiming the gospel on campus. Realising they are part of something much bigger than their tiny campus group, seeing how many others are in a situation just like theirs – that was encouraging. It was exciting!

it was a tiring week, especially for those who stayed up all night chatting!

P.S. I’ve recently added a link in the footer below for those who are interested in opportunities working with OMF. Why not take a look? 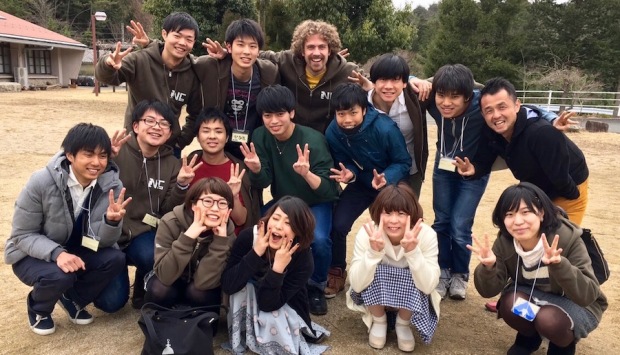 The Hokkaido gang – Hokkaido is the best! (n.b. the hoodies)