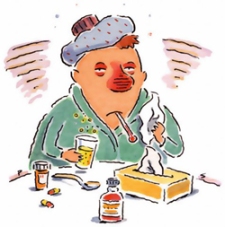 So here I am again, on my sickbed trying to recover from another lurgy. It was just before Christmas that we all came down with noro virus that was going round. This time I eventually made it to a local clinic to be told that I had flu.

As someone who used to pride himself on being healthy, this has been a humbling experience. Whilst living in the UK, I would go for years without even much of a cold to speak of. Here in Japan I’ve been bedridden more than once a year, being totally knocked for six.

What’s going on here? Is it that Japan is a less hygienic country? Far from it! Cleanliness is a highly esteemed cultural value in Japan. In some ways, the health system here is better than the UK, largely because it’s not free. Also, the Japanese have one of the highest life expectancies in the world living up to 84.6 years on average (2nd in the world compared to UK’s 29th). 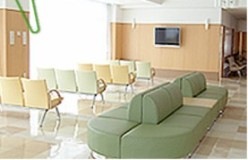 the very clean waiting room at the clinic

I heard recently that living in a foreign country means 30-40% more underlying stress. I’m not after a pity party here. I guess I have been learning that even in health (as well as the obvious area of language and cultural ineptitude) I am more limited here. It’s a chance to reflect again on the fact that I am not the Saviour and cannot do everything.

It’s another reminder that God loves to use the weak things of this world to show His power. I’m also reminded of Paul’s ‘thorn in the flesh’ which he asked God to take away. God didn’t take it away. God sent it to keep him from becoming conceited. Instead God assured Paul in the midst of the trial,

“My grace is sufficient for you, for my power is made perfect in weakness.”

So Paul boasts of his weakness so that Christ’s power would rest on him. He even could say he was content with hardships and weaknesses, “for when I am weak, then I am strong” (1 Cor 12:7-10).

I am also aware that a bit of flu or some such once a year is peanuts when compared with what many of my brothers and sisters are suffering in places like North Korea, Somalia, and Pakistan. Many of the famous missionaries of the 19th century like Hudson Taylor and Adoniram Judson faced serious, life-threatening disease, political unrest, war, burying their own children and not one but 2 wives in some cases!

Whilst praying for my health, I pray for God to help me be more like Paul, being content with these minor setbacks, even singing in prison, and rejoicing in suffering.

3 thoughts on “Lessons from a little lurgy”