I was on 3 summer camps in a row last month. Bucket loads of fun! 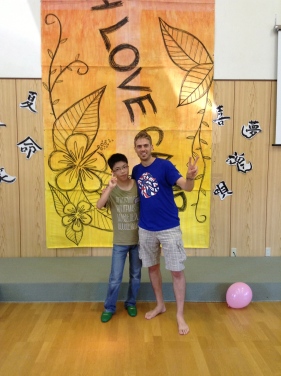 Me & Nobu at Nanae Christ Church

The first was in my home town, Nanae in the south of Hokkaido, Aug 8-10, and it was called Nanae Youth Love Camp. My main role was to support my boss, Pastor Yui, who was the speaker. I was there to pray for him, for his talks, to play piano when he needed that. I also chauffeured him and a young person from Grace Community down the night before. Was a fun road trip with some interesting chats – inevitably the topic of romance came up! We stayed that night in Chefoo School, where I grew up. I felt an overwhelming sense of nostalgia being back in this place that has such a special place in my heart. It was the first time I’d driven in Nanae. The last time I visited was May 2011 with my parents before they returned to the UK for my mum’s cancer treatment. Before that I hadn’t been for about 10 years. Some things had changed a lot – new roads, new buildings, the school looking older… other things hadn’t changed – the homely woody smell of the school, the delicious air, the warm welcome…

The camp itself was lots of fun. It’s a camp that is basically organised by a few of the youth themsleves. They had put a lot of effort into all the preparation to make it a really fun time. On the 2nd day we were scheduled to spend the day having fun at the beach but it was raining. But we prayed and got into the cars and headed to the beach. When we arrived, it was still raining. More prayer. More rain. In the end, we headed back and an extra session. We had an extended time of praise and there were times of heartfelt prayer for each other and seeking the Lord’s face. At the end of the camp, people shared their impressions of the camp, what they’d learnt. Many of them pointed to that rainy day as a real highlight. Out of about 15 people who attended, 4 said they had decided they wanted to be baptised! (Although, one of the 4 thinks she won’t get permission from her parents.)

A highlight for me was seeing a lad called Nobu. This lad was born with only half a heart. At that time, my parents were still working at Chefoo School in Nanae so we all knew about this situation. I remember praying for Nobu along with the children at Chefoo, that the Lord would spare his life. To meet him 19 years later, healthy, passionately serving as a leader in the youth group and loving Jesus, was very moving.

The second camp was the Grace Community family camp, Aug 11-12 at Takino Park. Again, it was lots of fun. Last year Ethan came with me – it was a shame he couldn’t make it this year. Some of the highlights for everyone was the annual water pistol fight (!) and cooking curry & rice over an open fire. Fun for all the family! 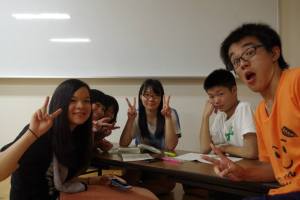 The third camp was in the same venue, this time with about 100 teenagers – the JECA youth camp, Aug 13-15. I was responsible for all the music and was leading a group of high school lads. I was a little nervous – I’d never done anything that in Japanese before. When we first arrived, it turned out that I was supposed to bring a data projector and I realised I’d forgotten a mic stand. uh-oh! Thankfully, the venue were able to supply our needs, or rather, the Lord supplied our needs through the facility staff! In short, it went smoothly and was lots of fun.

One of the songs we sang a lot goes something like: “God made the world! jump (x4), turn around, pose!” In the place of the word ‘world’ we often put someone’s name. The theme was ‘God’s Masterpiece’ and we worked through Eph 2:1-10 with verse 10 as the theme verse:

For we are God’s masterpiece. He has created us anew in Christ Jesus, so we can do the good things he planned for us long ago. (NLT)

For many, the idea that God lovingly, purposefully created them is revolutionary. A couple of young people decided that they wanted to be baptised.

At the end of the second evening session (the day of my birthday), someone suggested we sing that song again. I was tired and thought we’d probably sung enough times for one day. But to my surprise they sang it about me and presented me with a huge pile of canned drinks and a cake which some of the young people had clubbed together to buy for me! Then they all gathered round me to pray for me – what a blessing!

One thought on “Camp crazy”