Wow! Wow! Wow!
So much about the Olympics made me say “Wow!” The dedication, skill and power of the athletes made me go “Wow!” It was nice to see some familiar sights from East London where I lived for several years. I was sad not to be still living there when the Olympics were on, just like I was disappointed when I was living in East London for the 2002 football world cup in Japan!

What with the time difference and needing to work and sleep (!), we didn’t get to see much of the games, but I recently finally got round to watching the opening and closing ceremonies on YouTube. I think they were excellently done and made me proud to be British! There were many more “wow’s” whilst watching those. One of them was a “wow” at the Christian heritage of Great Britain shown particularly in the opening ceremony.
There was an interesting dance piece introduced by the BBC commentary as “a very different presentation of ‘Abide with me’. (from 1hr 24min – 1hr 29min if you want to see it). It starts with the light of a dawn appearing and the beating of a heart, perhaps symbolising life? It seemed to involve a father and son playfully creating together but in the end it is clear that the intimate relationship between the father and son is more important. It finishes with the son being lifted up towards the heavens. All this to the backdrop of the hymn being sung:

Abide with me; fast falls the eventide;
The darkness deepens; Lord with me abide.
When other helpers fail and comforts flee,
Help of the helpless, O abide with me.

Swift to its close ebbs out life’s little day;
Earth’s joys grow dim; its glories pass away;
Change and decay in all around I see;
O Thou who changest not, abide with me.

I need Thy presence every passing hour.
What but Thy grace can foil the tempter’s power?
Who, like Thyself, my guide and stay can be?
Through cloud and sunshine, Lord, abide with me.

I fear no foe, with Thee at hand to bless;
Ills have no weight, and tears no bitterness.
Where is death’s sting? Where, grave, thy victory?
I triumph still, if Thou abide with me.

Hold Thou Thy cross before my closing eyes;
Shine through the gloom and point me to the skies.
Heaven’s morning breaks, and earth’s vain shadows flee;
In life, in death, O Lord, abide with me.

I don’t know the views of the choreographer, London born Akram Kahn, but even just the hymn by itself was striking let alone whether there was any intention to use the dance to symbolise the relationship between the Father and the Son. At such a public, international event to have such words sung is a testimony to the Christian heritage that we have in the UK. 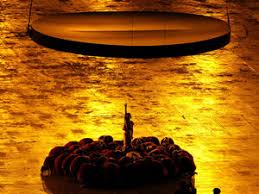 the son figure being lifted up

In Japan however, rather than Christianity, the culture is rooted in Shinto and Buddhism. As with Christianity in the UK, most Japanese would probably say they don’t actually believe in Shinto or Buddhism. But our roots matter and effect the way we think even if we’re usually unaware of it.

Seb Coe in his speeches said the athletes had something  “precious and irreplaceable… a chance to make an indelible mark on history.”  He wanted everyone involved to be able to say “We did it right”.

We have something far more precious in the gospel and a chance to be used by God in His plans for eternity. I long that we may play a part in God turning the roots of this nation away from Shinto & Buddhism and drawn towards the Son who was lifted up from the earth (Jn 12:32). And I want to be able to get to the end of this life and hearing God saying, “Well done, good and faithful servant” (Mt 25:21) or to paraphrase, “You did it right”.