Its been an exciting time at our church lately. Not because of the farewells, but more because of what they represent. 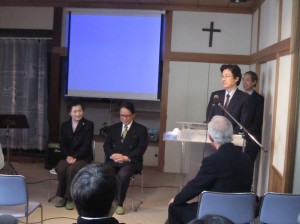 This week was our last Sunday with OMF missionaries, Tony & Pat Schmidt, who have worked at the Lighthouse Church for the past 2.5 years (having signed up for just 1 year!). It was also time to say goodbye to the advisor pastor, Yahiro sensei, and his wife.

They seemed to think that the past 3 years had gone by very quickly and yet, in that time, people had clearly grown fond of them and God has used them to do a lot in the church.

There was a couple of things that struck me at these farewells. One was the emotion shown, unashamedly, in a culture whose stereotype is one of reserved control of and hiding of the emotions. Women (and sometimes men) openly shed tears as they said their goodbyes to the leavers in front of all the church. There was an opportunity for people to say a few words about those leaving – things they had appreciated, things they will miss… 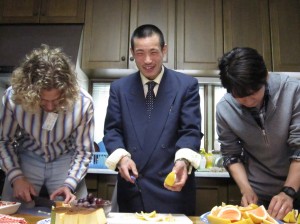 men chopping grapefruit - there was a real community atmosphere

The second thing that struck me during those little speeches was how often it was the little things that had made a deep impression on people; an email here, birthday card there, a phone call to see if they were ok…

Tony and Pat have been great examples to us of model missionaries in so many ways. Amongst other things, one thing we want to emulate is to prize the little things.

Farewells also meant ‘hello’s’! It was also the induction of the new pastor, Horita sensei, the church’s first Japanese pastor since its birth 11 years ago. It’s a significant and exciting step for the church, and we’re so glad we’re around to see this stage of the church’s growth. 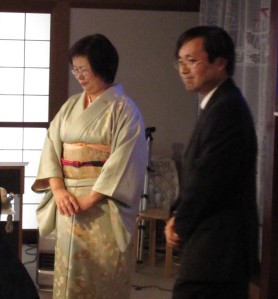